Have you seen the latest Spectator?

There is a great article about my talk I gave at the Yeppoon Hospital. You can read it here.

REGISTERED acupuncturist Raelene Blyth is accustomed to clients poking their tongues out at her.

As the room full of cancer survivors and their spouses grinned, Kay took up the invitation – and Ms Blyth made a  diagnosis.

It was an impressive start to a talk that ended with members – many sceptical at first – putting out their arms to discover they could have a needle inserted without pain.

But this was no game. Raelene Blyth took everyone along the road she travelled to bringing pain relief for clients.

“My mother was ‘alternative’,” she said.

“For years I had different experiences with her.

“So when I injured my back at work and was offered the medical opinion that I should have an operation to fuse vertebrae I turned to acupuncture.

“I was fixed in eight treatments. I have had no back issues in the 13 years since.”

She went to university studying Health Sciences majoring in acupuncture and when qualified, went to China to work in hospitals where acupuncture is as mainstream as Western-style medicine is here.

Ms Blyth said she studied for five years to attain her skills.

Asking everyone in the room who had received acupuncture treatment, Ms Blyth saw about four hands go up out of 20.

Early on, the questions came quickly: “Doesn’t it hurt? How can anyone have a needle inserted without it hurting?”

Ms Blyth said she was accustomed to such questions: “I have people coming into my surgery who are shaking. Some tell me they have an aversion to needles.

“They leave saying they felt no pain.”

But there’s more to a visit than instant needling. That’s why clients are asked to poke out their tongue.

“I ask similar questions as a doctor would but all the time I am looking at the patient and working out what I see.

“When they poke out their tongue I am looking at a probable indicator of what’s wrong because the tongue tells me where to look.

“The tongue reflects the whole body.”

She gave an example saying one tongue poked at her at the meeting was red on the right-hand side which, to Ms Blyth, indicated a problem with the liver.

When the person nodded agreement, Ms Blyth said “eye problems” were connected to the liver. There was another nod.

But the tongue is just one part of what is usually an hour-long consultation: “My aim is to balance the body,” she said. “There are 14 meridians linked to organs.”

Giving an example of her own, she said she broke an ankle because she ignored signs she was getting.

“I was busy. I was neglecting myself looking out for others. I had a fall that should have been simple but broke a bone,” she said.

She said the tip of the tongue gave clues as to the heart’s condition.

“I can tell if a client smokes and if that smoking is doing damage to lung tissues. It does in some people, not in others,” she said.

“I tell them my diagnosis. I tell some it’s time to give up. Some I say it would be wise to quit but, so far, there’s no damage. Age is also a factor.”

During treatments “I keep going back to the pulse because it represents different meridians”.

The consultation involves, for some, a combination of acupuncture and Chinese medicine, some she passed around the room explaining what it did and how she administers it.

In some cases, a herb is placed close to the skin and lit, the heat giving deeper treatment.

But questions kept coming back to needles and whether they hurt.

Ms Blyth passed around a packet of acupuncture needles saying it was likely a treatment over an hour would involve 14 being pressed beneath the skin.

“As I insert the needles on pressure points I take the client’s pulse and this is what I do while using more needles,” she said.

“Far from hurting, many clients fall asleep in my surgery with 14 needles bringing them relief and helping me to balance their body.”

Those in the room who have had acupuncture said they, too, had fallen asleep during treatments. She leaves in needles for 20 minutes.

“Acupuncture treatments keep working at what they are doing 24 hours after the clients leave the surgery,” she said.

“Sometimes it takes 48 hours to completely do the job. I ask clients not to take pain relief tablets while this process is going on.

“It’s amazing to see. You can still talk to the patient during the operation but they do not feel pain.”

She said people in China “live and breathe acupuncture”.

She said acupuncture was becoming more mainstream: “They are cutting down acupuncture costs in America by treating 10 to 20 people in a room at the same time.

“They sit in recliners and three or four acupuncturists move around the room treating the people. It’s getting more popular and more cost-effective.”

Back to talking about her own treatments, Ms Blyth handed around a glass “cup” used in cupping and she showed photos of skin treated by various methods to relieve pain deep in muscles.

There was much more. People were sitting forward as she spoke. The session closed with an invitation for someone, someone sceptical, to have acupuncture.

Tom Edmistone was first to try. He put out his arm, Ms Blyth inserted an acupuncture needle and he sat there saying he hadn’t felt it go in nor could he feel it while it was in his arm.

Others followed. Ms Blyth handed out a brochure offering a 15% discount to anyone interested. She ran out of flyers!

Ms Blyth has surgeries at Emu Park and Rockhampton and can be found under the name Raelene Blyth Acupuncture. 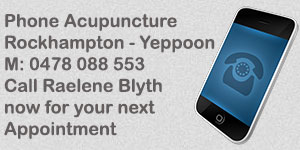 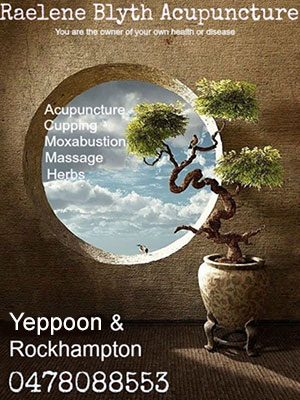